(To listen to this story as a podcast, click the link above.)

With four Eclipse Awards, three Breeders’ Cup victories, 11 Grade I wins and over $6 million in earnings, Beholder is truly the horse of a lifetime–of many lifetimes, really. The future Hall of Famer has accomplished what most can only dream about and did so in a way that left the racing world in awe.

“A racehorse like Beholder doesn’t come around very often, so you’ve really got to enjoy those kind of successes,” said Ned Toffey, General Manager of Spendthrift Farm, which owns the mare. “She is a mare who has accomplished on the track what few others have, to have won a Grade I at ages two, three, four, five and six. I think it always adds a bit of credibility to your operation to have a filly out there performing like that.”

Performing on the biggest stages for years was, in fact, Beholder’s specialty, and while she may no longer be doing so in front of adoring crowds, the 9-year-old mare is still the star of the show at Spendthrift Farm. This was evident on my trip to the Lexington farm, where I visited with the superstar mare and her offspring. Beholder was not born a leading lady, however. She earned it with each and every scintillating racetrack performance over her lengthy career.

Purchased for what would prove to be a bargain price of $180,000 at Keeneland September, Beholder scored her first top-level triumph in the 2012 GI Breeders’ Cup Juvenile Fillies. She won four times at the highest level during her sophomore season, including a defeat of future champion Close Hatches in the 2013 GI Breeders’ Cup Distaff. Winning her second straight renewal of the GI Zenyatta S. in 2014, the Spendthrift Farm colorbearer was scheduled to defend her title in the Distaff and then sell at the Fasig-Tipton November Sale, but fate intervened in the form of an illness that kept her out of both. That illness proved to be a blessing in disguise, as a year later, Beholder would accomplish one of her greatest feats, cementing a permanent place in the Spendthrift broodmare band.

Opening her 2015 account with a trio of facile victories, including the GI Clement L. Hirsch S., the Richard Mandella pupil faced males for the first time in Del Mar’s GI Pacific Classic. Beholder made an eye-catching move on the backstretch, sweeping to the front with a half-mile left to run, and cruised home under a hand ride from Hall of Famer Gary Stevens to win by 8 1/4 lengths (video), defeating a field that included Grade I winners Bayern, Midnight Storm and Hoppertunity. As announcer Trevor Denman said, “Beholder is poetry in motion. Beholder and Gary Stevens did not win, they romped in the Pacific Classic.” She won yet another renewal of the Zenyatta after that and was scheduled to meet Triple Crown hero American Pharoah in the GI Breeders’ Cup Classic, but was scratched after bleeding during a morning gallop days before the race.

Returning to the track in 2016, Beholder kicked off her 6-year-old season with a pair of wins, including the GI Vanity Mile, which has since been renamed in her honor. The bay finally made it back to the Breeders’ Cup for that year’s Distaff, which was billed as a match race between the mighty Beholder and the undefeated, 3-year-old superstar Songbird. And, boy did they deliver. It was a knockdown, drag-out battle to the finish between the champion distaffers, each refusing to yield, but, in the end, it was the mighty Beholder who proved supreme. Summoning all her class, Beholder concluded her career with one of the most memorable performances of this century, defeating her younger opponent by the tip of her nose in a race that did not deserve a loser (video).

A racehorse like Beholder doesn’t come around very often, so you’ve really got to enjoy those kind of successes.”

Beholder’s most outstanding accomplishment, however, may be her longevity. The big-bodied bay mare won Eclipse Awards at ages two, three, five and six and won at least one Grade I event in each of her five seasons on the racetrack, a feat that is truly remarkable. Now that her career on the racetrack is over and the champion mare has transitioned to her new life as a broodmare, the Spendthrift team hopes she will pass on both her outstanding talent and longevity to her offspring.

“There was a time where we had intended to take her to auction and, fortunately for us, she got sick and wasn’t able to make the trip to Kentucky for the sale,” Toffey said. “Sometimes when you have bad luck, it turns to good luck. Once she went on from there and really showed what she could do as an older horse, I think the decision became easy to keep her in our program.”

It is often a concern that these top racemares won’t take well to farm life, but, just as she did on the racetrack, Beholder has done everything right in her new career. As I enter the barn, she looks out at me over her stall door in a way that lets me know, as if I didn’t already, that I was in the presence of greatness. The good ones have that look about them, the look of eagles as D. Wayne Lukas called it, and Beholder has it in spades. She happily accepted peppermints from broodmare manager Aimee Compton and then began pulling at her stall latch, letting Compton know she was ready to go outside. The four-time Eclipse winner calmly strolled to her field and immediately began grazing alongside her friend Aspen Mountain, dam of Grade I winner Bolo.

“We were a little worried about [how she would settle in], but she did great from first off, going to a paddock by herself and then to getting a buddy,” Compton said. “Everything went really smoothly. She did a great job.”

She continued, “Beholder is a little bit of a diva. If there is something she doesn’t like you doing with her, she’ll let you know, but, in general, she’s really good. She was great with the babies. She is a good mother.”

Beholder’s first foal is a now-yearling colt by Uncle Mo named Q B One, who Spendthrift owner B. Wayne Hughes has decided to keep and race himself. Standing outside the yearling barn, the glistening dark bay colt is nothing short of stunning, possessing the best of both his top sire and superstar dam.

“The first thing you notice about him is his size,” said Spendthrift’s yearling manager Seth Semkin, who deemed Beholder his top pick of the sale when leading the Spendthrift buying team in 2011. “The second thing I noticed about him is he’s a very smart horse. I would also say for his size, he’s very athletic. I think whoever gets him is going to get a colt that wants to train because he is that kind of horse. He has done nothing but get smarter and better.”

When asked how he compares to his mother, Semkin said, “She was pretty strong minded herself and he seems to me like he’s going to be that way.”

Beholder’s latest foal is a weanling filly by Curlin, who will eventually join her dam in the Spendthrift broodmare band. The filly shares her dam’s light bay coloring and gives off the same air of confidence, composure and calmness as her mother as she stands at the end of the shank.

With two very nice foals on the ground already, the Spendthrift team eagerly awaits Beholder’s 2020 offspring by War Front, who is having what is arguably his best season yet at stud thanks to GI Preakness S. hero War of Will and multiple Grade I stakes winner Omaha Beach.

“She’s really been remarkable as a broodmare,” Toffey said. “She’s done everything right. She has been very professional, just as she was on the track. She’s continued well into her second career and threw a very impressive Uncle Mo colt that we will keep. She followed that up with a beautiful Curlin filly and we are really excited about her. I think, once she is done racing, she will come right back to Spendthrift and hopefully be a great addition to our broodmare band.”

He continued, “Beholder has done great for us. She is back in foal to War Front and it is obviously good timing with that. War Front is having a great year and proving what I think a lot us thought he could do, get horses on the dirt as well as the turf. We are looking forward to that addition next spring.”

As if Beholder wasn’t already valuable enough as a broodmare, her family has exploded over the past few years, strengthening an already outstanding page. Spendthrift purchased her older half-brother Into Mischief (Harlan’s Holiday) for $180,000 at OBS March in 2007 and he rewarded them with a win in that year’s GI CashCall Futurity S. The handsome bay proved to be even more talented as a member of the Spendthrift stallion roster and is now one of the hottest sires in the country with 57 stakes winners, including Grade I victors Goldencents, Practical Joke, Covfefe, Mia Mischief and Audible.

“Into Mischief is just one of those diamonds in the rough,” Toffey said. “He was very, very talented racehorse, who probably didn’t get to show everything that he was capable of when he was on the track. He was a wonderful racehorse and being a Grade I winner at two is a pretty important part of the puzzle as a stallion prospect. Honestly, it took breeders a little while to warm up to him, but, once he proved what he was able to do, it has been onward and upward. We are so appreciative of all the breeders who have taken a chance on him and things paid off for them. He is a huge boost to any operation and he is certainly the cornerstone of ours.”

When Beholder and Into Mischief’s younger half-brother by Scat Daddy went through the ring at Keeneland September in 2016, Mr. Hughes and the Spendthrift team fought to bring him home to join his siblings. But, the Coolmore contingent was not going to let a well-bred and well-put-together son of their late leading sire get away and M.V. Magnier was left signing the ticket on the $3 million sale topper now named Mendelssohn. Sent to international superstar Aidan O’Brien, the dark bay won the 2017 GI Breeders’ Cup Juvenile Turf and the 2018 G2 UAE Derby, and was also second in the GI Travers S. He stood his first season at Coolmore’s Ashford Stud in 2019.

Beholder’s dam Leslie’s Lady (Tricky Creek) proved she still had it at this year’s Keeneland September Sale. The 23-year-old mare’s yearling filly by American Pharoah was all anyone could talk about on the sales grounds leading up to the day she was scheduled to go through the ring and she did not disappoint. With Mr. Hughes and Spendthrift team seated across from Mandy Pope and her advisor Todd Quast inside the pavilion and Sheikh Mohammed and the Godolphin crew in their usual spot in the back ring, a bidding war for the ages ensued as the filly exuded class, standing perfectly in the ring. Spendthrift conceded, leaving Pope and Sheikh Mohammed to decide it and it was Pope who won the war at an astounding $8.2 million, the most ever paid for a yearling filly at Keeneland.

With a family that continues to develop and succeed, Beholder’s resume just keeps getting better even in retirement. It is hard to believe that the four-time Eclipse winner can accomplish anything greater than she already has. But, if her current offspring run to their looks and she continues to produce foals like these, the sky is the limit for this sensational mare, who has proved more than once that she is capable of legendary feats. 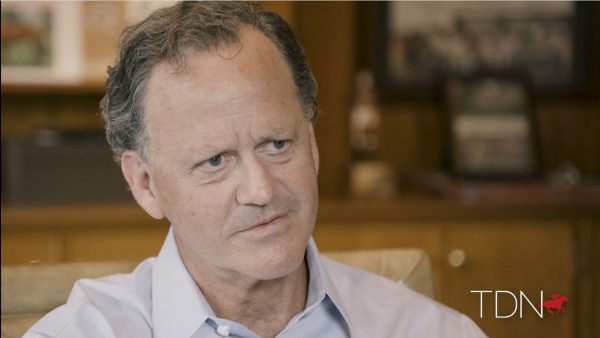 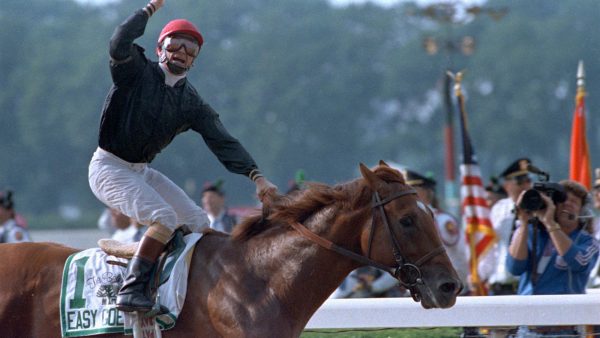